Hi Runners! We already told you some existing cards would be making an appearance in Uprising, but not how many or which ones. I’m here today to put that right. For a start, there’s five of them - one you’ve already seen (twice - False Lead), one that is fairly well known (Colossus) and one we not so subtly hinted at (Self-modifying Code). Well here they all are, with new art and flavour text!

Why did we keep these around? I’ve asked David (@divadus), our Lead Developer, to fill us in.

It likely goes without saying that reprints in Netrunner are a somewhat contentious topic. Opinions on them vary wildly, ranging from elation that well-loved cards are granted a stay of rotational execution—or even brought back to life—to confusion about precisely which cards are saved, while others that one might consider more “important” are not. This goes all the way to frustration that cards are being reprinted at all as opposed to rebalanced alternatives, or just a freeing of design space entirely. All of those responses are quite understandable and I can promise that considerable deliberation between Development and Design went into each of the specific reprint choices. 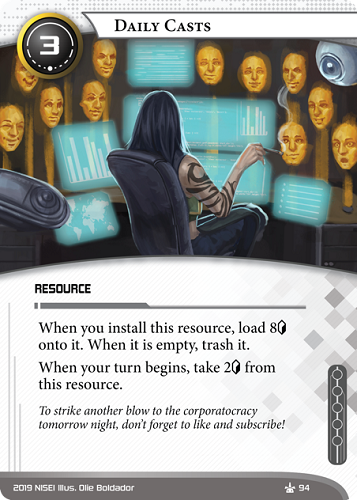 While not an especially flashy or “exciting” card, Daily Casts was probably the most uncontroversial reprint among the Design and Development teams, serving as a baseline for strong, straightforward, neutral Runner economy. The “drip” counterpart to Sure Gamble’s “burst” economy, Daily Casts is here to stay. 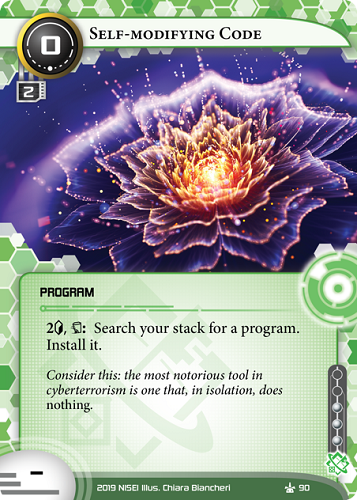 On to the most iconic card amongst the reprints: Self-modifying Code. It is perhaps the archetypal Shaper card, exemplifying the faction’s rig flexibility—a feature that we explored a fair amount throughout Ashes. An incredibly potent Shaper mainstay, SMC boasts the ability to tutor any program within the Runner’s deck on the fly. Ultimately, the decision was made to preserve this versatile powerhouse of a card, due to the simplicity and effectiveness of its design. Rest assured that we are very much aware of the card’s role within its home faction, and how substantially it impacts future design space for programs and tutoring. 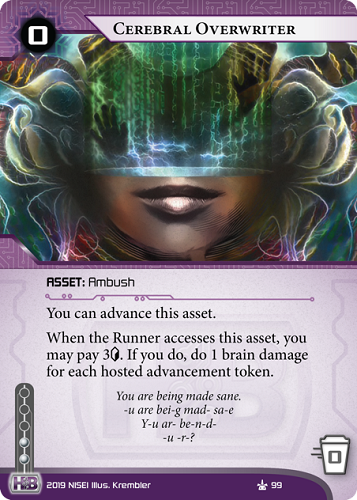 One of the more internally contentious reprints, Cerebral Overwriter is one of the few Corp-side cards from Creation and Control that has maintained a competitive presence throughout the years. A frightening include in decks looking to threaten a flatline wincon, often alongside a timely Mushin no Shin (or perhaps other such sneaky tools moving forward), a successfully baited Overwriter can decide the outcome of a game. While “guess right or maybe die” is certainly not every player’s idea of premier Netrunner, having a wide range of Corp win conditions is key to maintaining side balance and Overwriter certainly contributes in that regard. Have fun continuing to decimate hand size! 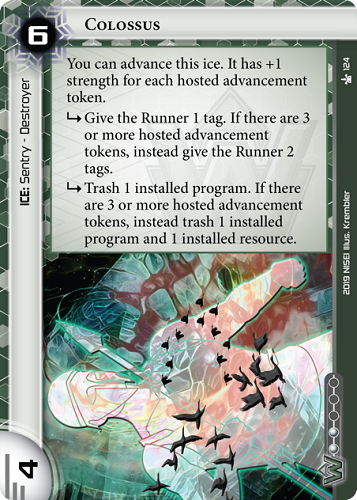 While Colossus was left out of System Core 2019 because it didn’t quite fit the vision for the product, I and others on the team had been very much looking forward to resurrecting it. While a rez cost of 6 is fairly high for a piece of ice, Colossus is a particularly effective choice for decks looking to invest heavily into ice advancement, benefiting both from the improved “3 or more advancement token” subroutines associated with the “7 Wonders” ice, and the increased strength per token. As Morgan indicated previously, the decision to include Colossus among Uprising’s reprints actually influenced a number of the advancement-focused designs for Weyland in the set (the recently spoiled Wall to Wall, as well as Akhet and Cayambe Grid). 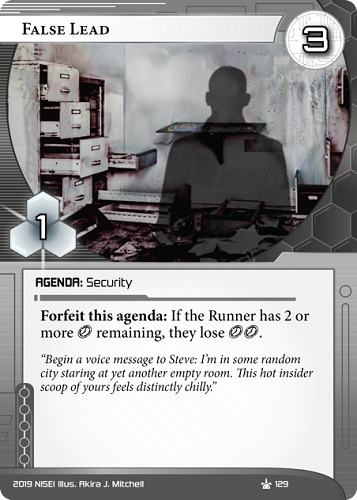 Similar to Colossus, False Lead was a card that I wanted to include in System Core 2019, but which failed to gel with the product’s introductory purpose—agendas which forfeit themselves at paid ability speed to prematurely end a Runner’s turn fall somewhat outside the realm of back-to-basics Netrunner. In the Standard format, however, False Lead joins the throng of game-shaping 3/1 agendas alongside the likes of House of Knives, AR-Enhanced Security, and Sting!. Various flavours of Sportsmetal and Jemison will likely find convoluted, combo-tastic uses for this agenda, and it may just find its way into agenda-dense Argus builds as well.

These are the five reprints that you’ll find in Uprising. We hope that their reintroduction into the standard card pool will give some love and perhaps even new life to decks that have missed them greatly, or that they will continue to serve the fundamental purpose in the meta that they have since their original introduction.

You step in the stream,

but the water has moved on.

Fragment is not here.