Hello again, Runners! It’s Morgan here, back yet again with another scoop and another article! Except this time I am joined by none other than the wonderful Oguz Han (aka @lostgeek), winner of the very first tournament that NISEI ran—the 2018 Eternal Championship—and also the first Champion to work with us on the Most Coveted Prize in Netrunner… Getting to create a card!

I had the pleasure of being on point for working with Oguz Han to fully realise the card he imagined, throughout the development and playtesting of Uprising. This was honestly one of the highlights of the set for me, as focusing on a singular vision for a single card is a rather refreshing change of pace to the breadth of view that is required for an entire card cycle, faction, or side.

The two of us sat down over the course of a few days and reflected together on the process by which his card was incubated and born over the past 8 or so months.

Morgan: So, why don’t we start where all this began! Could you tell the readers a little bit about yourself in regards to Netrunner, and what the origin of the idea for your card was?

Oguz Han: Hi, thanks for the introduction! I started playing Netrunner roughly when Terminal Directive came out and have been playing a lot ever since, trying to get good both at building decks and playing the game. I’ve played Shaper at tournaments a lot, so in the end the card I created became a Shaper card.

With it, I wanted to capture a moment I experienced in Berlin in 2018. It was a sunny August afternoon with our group of Netrunner players deciding to go for lunch during the break of the Regional tournament. We started looking for a place and ended up in a “Currywurstbude” called Curry Paule (those of you who aren’t familiar with German cuisine, please go ahead and Google “currywurst”). We all ordered our food, had a funny little chat with the waiter, who may or may not be called “Curry ‘Curry Paule’ Paule”, and then just went on to enjoy our food in the company of a diverse group of people with a common passion for this little game of ours. The place became a small meme in the German community, so when I got the opportunity to design a card, I decided to capture this serene little moment.

So it would be a “location” resource, that much was obvious. And it should be a place where Runners meet to relax and share some of their secret bits of information with each other. The first idea that I sent to Greg looked something like this:

That’s not quite what we ended up with in the end, is it?

Morgan: It’s not! In fact, that’s actually different to the one that the Development Team first saw, as well. The first version I recall seeing was called “LGC”, and had the text:

Which was tremendously bizarre, albeit cool, but after we were told it was a Champ Card we just sorta… left it alone, and started playtesting with it. It wasn’t until around the time we began Uprising-specific testing that I ended up getting in contact with you and we worked on the card together for the rest of testing! When I finally heard what the actual origin of your concept was I was immediately fully on board. Without question, my favourite sort of cards in Netrunner are ones which are a perfect fusion of mechanics and theme, so I was invested in getting this card right.

The card went through a lot of iterations before we finally got just the functionality down, and even more tuning for balance after that. But it was all worth it, because this… This is where we ended up! 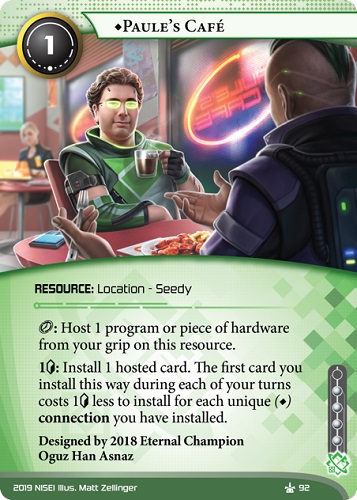 Is this the sort of thing you would have ever expected to end up with from your original concept?

Oguz Han: Not at all! When Greg pitched the LGC idea, I was kinda baffled by the idea of competing with Self-modifying Code. That card has been a staple since Creation and Control and has shaped (ha!) the entire subsequent faction design. Also the idea of either building a perfect install cost ramp for your programs or juggling multiple copies of a unique connection with Aesop’s and reinstalling them both seemed premium Shaper BS™ to me.

But in the end, once it was clear that SMC would get a reprint, it was pretty obvious which of the two cards would win the fight for a place in competitive decks. That’s when the two of us started working on the card and I think you came up with the idea of trying a more Personal Workshop-y design. And while the general idea of the card did not change much from this point on, it was interesting to see how you took playtester feedback and tried to tweak all the little knobs and levers on such a card. Can you describe your process of getting the card to its final version?

Morgan: Well, after we hit on the Personal Workshop angle it was mostly a question of figuring out just how we’d mesh together the unique connections and the whole hosting and then instant-speed installing thing. I remember for a while there was a clause about it trashing half your connections when it was trashed, to simulate the idea of a bunch of your friends getting killed when the Corp blows up Paule’s. Grim. That got cut because it ultimately was just too much stuff on the card.

Easily the most tricky thing about the card was figuring out exactly how effective it should be. The scaling nature of the card gives it a very high ceiling, but you need those unique connections just to get it working at all. That makes the card inherently a bit slow, but once it gets rolling it can give you an incredible amount of acceleration. Not to mention the utility of being able to squirrel away cards on it that you overdraw, or the ability to install stuff at instant speed.

At one point the install ability gave you the discount every time, and not only on your turn, as you surely remember, and for a while it was even 0 credits to use! That ended up being too much acceleration, so we had to hit it with a series of nerfs which, well, I remember you being a little sad about, but also relieved. The important thing, though, was that every single change we made I bounced off you. It was your card after all! But we worked out a lot of interesting compromises during our discussions, and it was never a drag to have to bring those changes to you first.

There’s definitely something to be said about this being NISEI’s very first Champ Card, though. We had to get it right, really right, considering the controversial history of what Champ Cards have typically been like. But it was also an opportunity to set in stone the methodology for creating and iterating on these cards. I’m really proud of how the card turned out, and working on it so closely with you was energising. It’s absolutely the method I plan to use for all our future Champ Cards, and I’ve already been working on that with the one we will have in System Gateway as well!

But there was another side to the card, as well: the art. You got to have yourself immortalised on a card by Matt Zeilinger, which was supremely awesome. What was the process of working with Patrick (bluehg) on the art side of the card, and how did your perception of the card change as the art and theme crystalised?

Oguz Han: Oh, it was lovely to work with Patrick on this. When he told me that Matt Zeilinger would be creating the art for my card, I was blown away. We exchanged a few ideas on what the card would look like and I staged some template photos together with a meta mate, which became the basis for the art. After a short time I had several sketches to choose from and immediately fell in love with the atmosphere that would go on to be evoked in the final artwork. With the art in place, I felt the theme of the card was now completed by a very vibrant representation of the place I had in mind.

It was great to be able to be a part of this creative process and I’d like to thank everyone involved very much. It will take some getting used to—seeing my own face staring back at me from a card—but I can’t wait to add this into every deck I build from now on!

Morgan: Thanks for joining me for this article, Oguz Han! I’m excited to see how your card fares out in the wild. I can’t emphasize enough how lovely it was working with you on this one, and I’m really pleased to continue to have you in the playtest team as well. Again, thanks so much!