Hello again, Runners! It’s Morgan here once again, except this time I am just giving a preface for some words that four of my wonderful playtesters put together for us. They’re here to talk a bit about what playtesting for NISEI has been like, a little about the cards they liked testing the most, and to share some thoughts on the three new spoilers we have today!

Playtesting is a vital part of the development process, as the playtest team is able to not only put the cards (or MWL changes!) through their paces over and over again, but they also give us a critical look at what the general playerbase might do with the cards in the wild. Trying to predict everything is a very challenging task, but by Hackson they sure do their very best, and I am constantly thankful for the work they put in.

Speaking of which, another reminder that I recently opened up applications for playtesting for NISEI! There are applications out for both the MWL/Organised Play and Product/Set testing teams. We’ll have a formal announcement on the blog here very soon, as well as a dedicated page on the website, but for now you can find information about it either on the NISEI Facebook page, or on our Twitter, and there’s also a post about it on the Netrunner subreddit. If you’re at all interested, please check those out, or keep an eye out for the formal announcements very soon!

Without further ado, here are the three newest spoilers!

Playtesting for NISEI has been a lot of fun so far. New meta exploration has always been my favorite part of the game, and during playtesting there’s a new meta every week or two. It’s also significantly improved my deckbuilding, since I can’t just go grab a stock list to test new cards. On the whole it’s been great, and I’m looking forward to jumping into System Gateway testing soon. 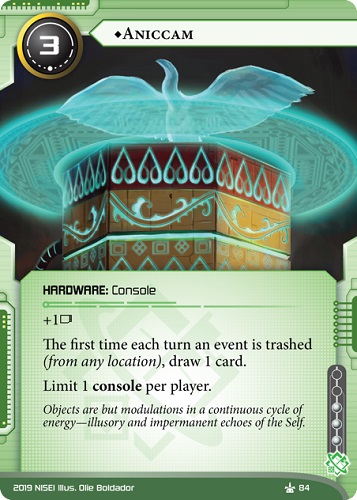 Aniccam is a card that has an interesting development history. In its early days it was everything from Reaver-lite to Prepaid VoicePAD on a console. Towards the end, it finally settled into its current version, which I really like, though I think it might not have a home in a competitive deck for the moment. Shaper lacks the events to make it work and the influence is prohibitive for importing it. That said, I expect we’ll see some more green events to fuel it soon.

A few other cards I really enjoyed testing were Moshing and In the Groove. The original versions of both of them were really neat, but had some edge cases that enabled some pretty degenerate decks. Interestingly, the busted ItG deck we came up with turned out to still be good after the card was changed, and eventually became Rube Goldberg Hayley. The deck old Moshing was enabling, on the other hand, turned out to be terrible without it, so don’t worry about that popping up to haunt store champ season.

Playtesting for NISEI has been a blast. Partly because I get to see new cards and new mechanics, but also because it’s a fun way to engage with the fundamental ideas and ambitions of Netrunner, and discuss what makes the game look and feel the way it does. That part of playtesting — the continued discussions about the quintessence of Netrunner and how the playtesting cards support and extend it — is my favorite part. In my opinion, Uprising really encapsulates that and demonstrates the care that NISEI takes not just with driving Netrunner forward, but with keeping it very much Netrunner. 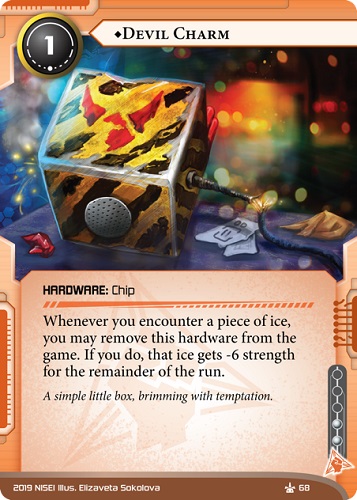 Devil Charm is a great example of this. There was a time when Dean Lister supported the Anarch / Aumakua plan, which definitely caused quite a stir. While I am happy to see Dean Lister gone, I love the idea of bringing back support for those one-off runs where you just really need to get in. Devil Charm perfectly encapsulates that idea, offering up a single-shot, super-powered Ice Carver to let you slip past ice (not to mention its other applications, which I leave as an exercise to the reader). In addition, the styling and art of the card extend the idea we saw in Lucky Charm, reappropriating those Sacrificial Constructs for definitely less Shaper-y purposes. This card is both quintessentially Anarch and incredibly fun, amping up those last-ditch runs in addition to serving more precise purposes.

Similar to Devil Charm, Aniccam is a card that does double duty, and really pushes the answers to two questions: how do we help shapers not die? And what can we do to support event-based Shapers? (Look, just ignore that voicepad ringing in the background.) Aniccam solves both problems in a concise package, asking Shapers to pack more events than normal with the promise of a ton of tempo and damage protection for their efforts. And, really, there’s nothing like Rejigging a Flame-Out to draw into your Euler.

Overall, the Uprising cards seem to me to share a similar theme: they consider the best parts of Netrunner, and try to print cards to push and extend those ideas into something new. And playtesting these cards, trying to find and focus those fun bits and new ideas, has been incredibly rewarding. Looking over the set, from the Lockdowns to the tech-oriented 4/2 agendas to the monstrous new ice, remembering earlier iterations (such as a previous version of Project Vacheron that promised to force a Runner to steal five 5/3 agendas to win), it’s really exciting to see the new archetypes, old friends, and sheer fun Uprising brings to the Netrunner meta.

So one of the weird things about writing for this article is that I’ve played against all of the above cards a lot more than I’ve played with them. The good news is that they have still been fun. In fact, it feels generally like there’s been a big focus in this set on ensuring cards are enjoyable for both players and not merely “balanced” in a competitive sense.

The best example spoiled here is probably Aniccam. Because it fires off of damage, the card becomes a factor in kill matchups. However, early versions were too broad in working off of different card types, and pushed it too hard towards existing engines like Aesop’s Pawnshop. In its final form it gives event-heavy Shaper decks another option and can even be splashed into Criminal. Now if only Prepaid VoicePAD could come back…

The final card I’d like to talk about has already been spoiled, but I feel it illustrates this point further (and is also a card where playtesting really made a difference): Prāna Condenser. This card went through as many radically different phases as any in the set (including being an upgrade). Eventually a grind -> burst net damage conversion concept was fixed upon. The card was probably balanced (if you like putting Caldera in every deck), but a last minute burst of testing found that it could be very NPE with the right support, and dev had to step in at the 11th hour to give you what you see today.

Playtesting for NISEI is very rewarding; it feels good to collaborate with a group of people who are as passionate about Netrunner as you are, and to turn that passion into a force to help the community. Being able to play and provide feedback on upcoming cards has been a good way for me to participate in the NISEI process, and I’m glad for that. Uprising really benefited from a playtesting extension, as we ended up putting nearly another month of work into it. I think the polish really shows, and I’m proud of all the cards in this set.

When I playtest, I typically only focus on a faction or two. I’ve always been a Weyland/Anarch player at heart, so similarly to Downfall, I spent most of my energy in providing feedback on those factions’ cards. I’m not one for design or theory, so I tend to evaluate cards purely in terms of power level and whether they will be played or not, much to the chagrin of some of my fellow playtesters. 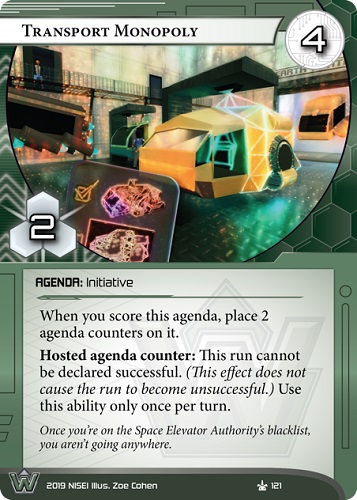 I’m happy with how Transport Monopoly ended up. Early in the dev cycle Earth Station’s theme and rough ability was locked in, and Weyland’s cards kind of grew to support that identity. In its early versions, Earth Station was much more powerful, and as a result Transport Monopoly only gave one counter when scored. As some power was taken away from the identity, Transport Monopoly grew stronger as a support piece, eventually to two counters, and then for a while it gave you a passive trace ability to prevent runs from being successful or unsuccessful for card effects. In the end, I think Earth Station and Transport Monopoly compliment each other nicely. I’m excited to see how it plays out in the wider meta, and look forward to hacking the beanstalk!