Today being the day of fools, there was some debate about what to do. We didn’t want a joke article, but dropping a serious article on today also didn’t feel right… but then a conversation happened in #future on Stimslack where I jokingly suggested doing a live-stream about our pets, after which Aki suggested this article title and so here we are. I hope you like fuzzy critters, cos that’s what we’ve got lined up for you! There isn’t any actually useful information in this article though, so if you don’t like animals feel free to stop reading.

First up we have Brooklyn and Growly, who have even appeared on a card for a KOS-style event! @bluehg says “The little one is a Boxer/Dachshund mix named Brooklyn. She’s smart as a whip and incredibly athletic. Also incredibly stubborn and very much her own woman. She loves cuddles, but only when SHE wants them.

The big one is her big brother Growly, a Boxer/German Shepherd/Staffordshire Terrier mix. He...is not as smart. He hits his head on tables and closes his eyes when playing fetch so the ball hits him in the face. But he’s super sweet, and there’s no one as excited to see me when I come home as he is.” How many animals can say they’ve appeared on a Netrunner card? Not many, but I suppose when you live in the house of an alt-art wizard like Pat, that’s not surprising. 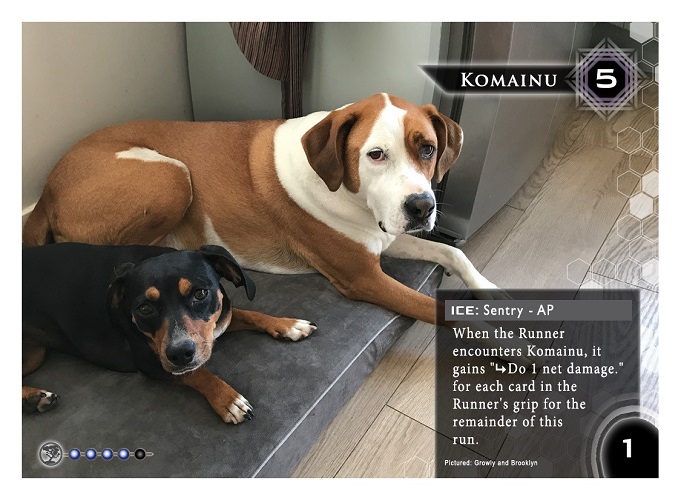 Next up is Ron Weasley, @plural’s new furry friend. “My family had cats for 20 years and then had a spell of just over a year without any feline friends. Ron was a stray who was taken in by someone until their landlord found out and turned him over to the Humane Society of Milwaukee. We adopted him 2 weeks ago and he seems pretty happy here so far! He plays hard and sleeps hard.” Sensible cat, that’s how I roll too. 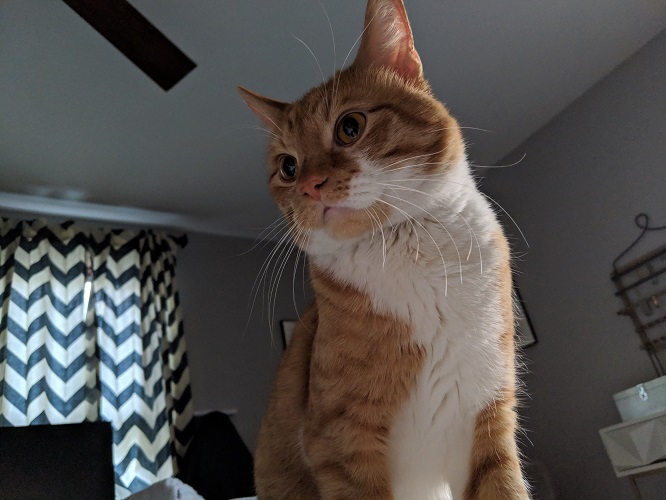 @crushu also has a pair of furry friends, “I have two pets, a cat named Orion and a dog named Ellie. Orion is maybe six months old and is a playful kitten, Ellie is five years old and is a playful puppy. Orion likes to chase our robot vacuum around and mess with it. Ellie just stays in her kennel instead.” Sounds like Orion is the boss, but what do you expect from something with the same name as a strength 8 piece of ICE? 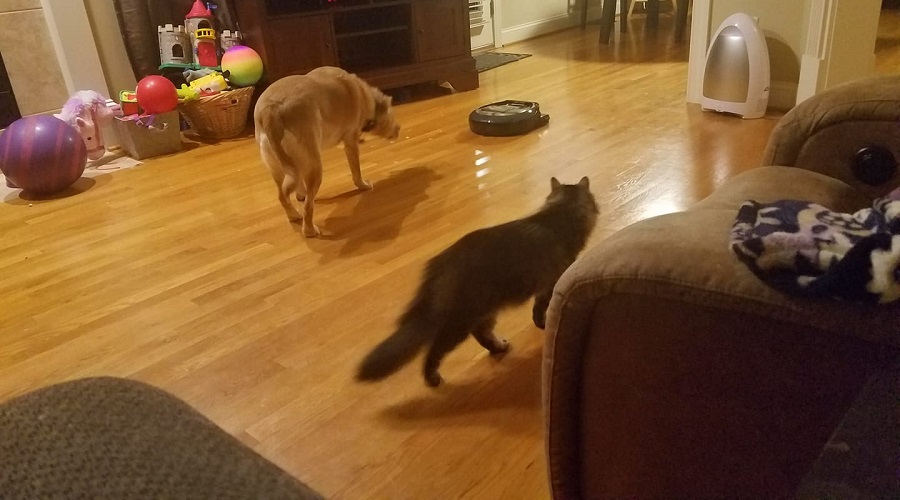 @shanodin only recently got her four legged housemates… “We rescued two wonderful cats about a month ago. Sasha and Cindy, or Floofy and Slinky as they are otherwise known. Sasha loves to come and bonk you with her noggin if she wants pets but Cindy can't let her get all the fuss and will always try and get right up in-between you and Sasha. They are eight (Sasha the ragdoll) and six (Cindy the Siamese) so that, paired with the fact that they actually respond to them, means we didn't change their names when we adopted them. Mostly I call them batface and chonkster. They spend every night trying to get into the bedroom but when we let them in they just want to climb on the dresser, knock stuff over, and get into the wardrobes. They are perfect.” 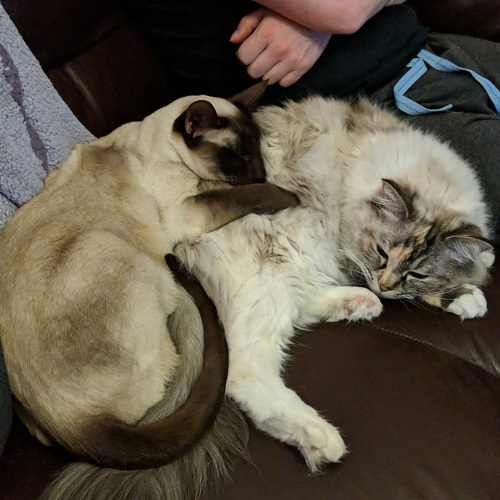 @kevintame wrote “Here is my dog WiFi! He is a Cavalier King Charles Spaniel.” which is a 21st century pet name if ever I heard one... 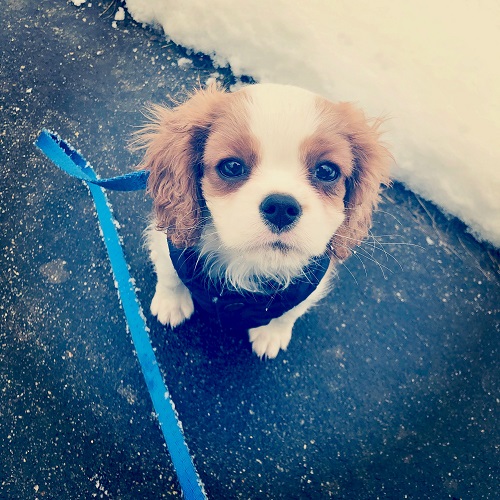 @krembler simply said “This is me and the best boy :)” on the picture of him and Kai - and I’m pretty sure Kai is the one who takes Krembler for walks, rather than the other way around. 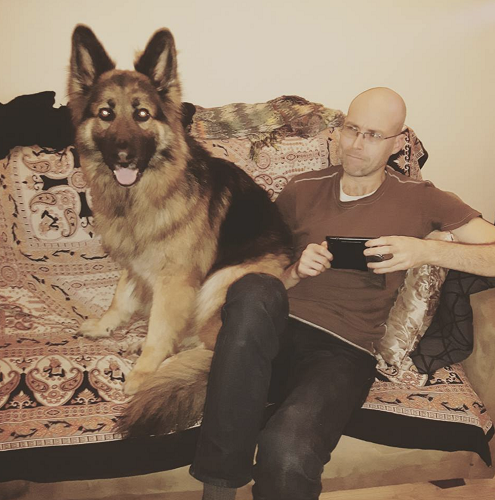 Back now with Team Cat, we have these from Kayli… “Attached are my kitties, Missy (the orange tortoise-shell) and Scout (the grey tabby). My husband and I got them two years ago. They're the sweetest, snuggliest kitties. Scout is 12. When we got her, we were told Missy was 2, but she was actually only 8 months, so she's about 3 now. She was a mommy kitty before we got her, but still just a kitten herself.” Totally adorable. 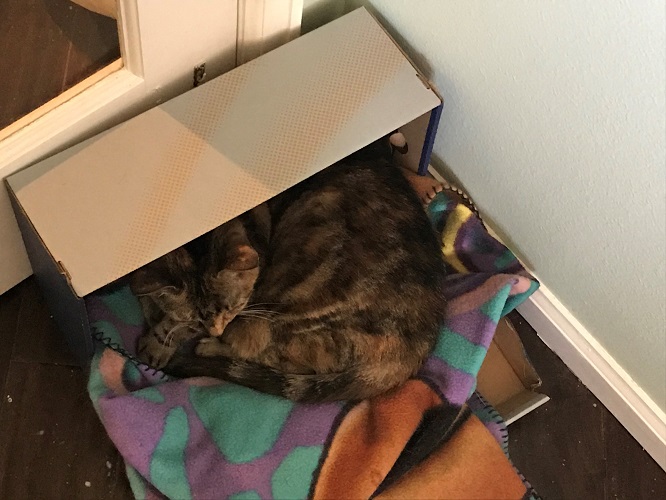 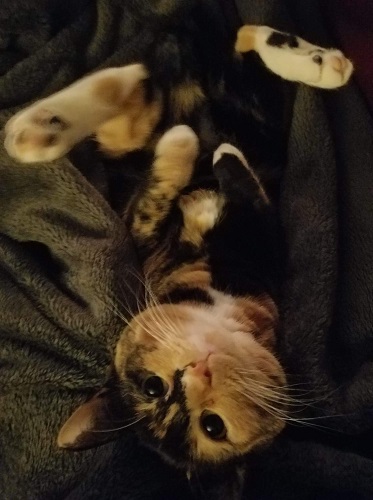 Adam introduces us to this little dude with the kind words of “This is Jake. He’s a butt. He’s always hangry. He hates the winter and loves to play with his two favourite toys: squirrel, and the rope he tore out of squirrel.” I’m sure Jake has lovely things to say about you too Adam... 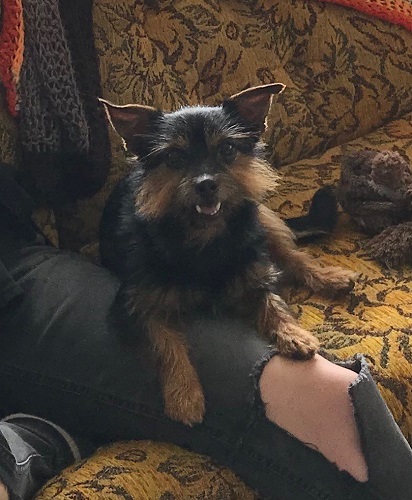 @manveruppd says “Here's one of my multiple cats inspecting the beers I brought back from the UK while sitting on a Freelancer playmat which is temporarily being a mousepad. (Shout out to #thebrewery on Stimslack!)” You’re doing good work kitty, keeping Mike from drinking terrible beer. And they say dogs are a man’s best friend... 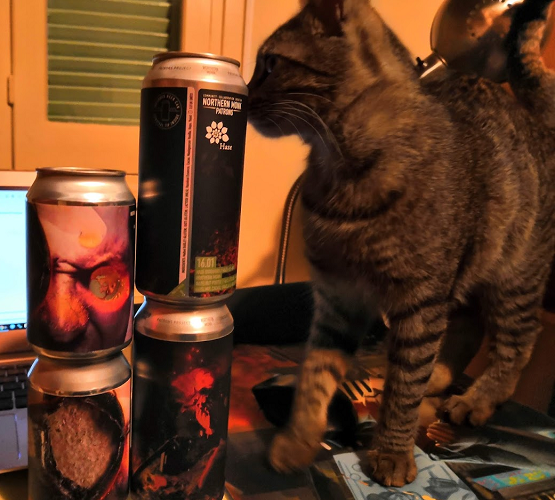 Anzekay has a very rock and roll pet, “This is Daeg! He's almost 13 years old, almost too smart for me to handle, an extreme beefcake and easily the friendliest cat I've ever met. He enjoys chasing butterflies on the law, napping on warm paving, sitting on motorbikes (this is a new obsession), and licking my bowl clean after breakfast every morning.” 13 years old and just started on motorbikes? Dangerously close to a midlife crisis there kitty… 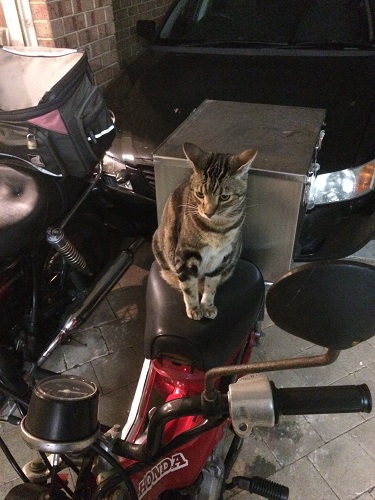 Laury is obviously on Team Friendship as they have both a dog AND a cat… “This is my cat, Duke Squeelington the 3rd. Or Squee for normal use. As well as my dog Tycho. They are both lovable goofs.” 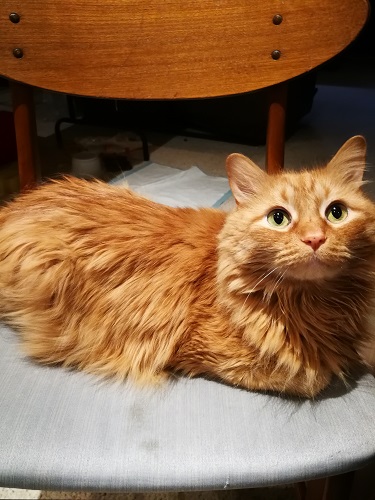 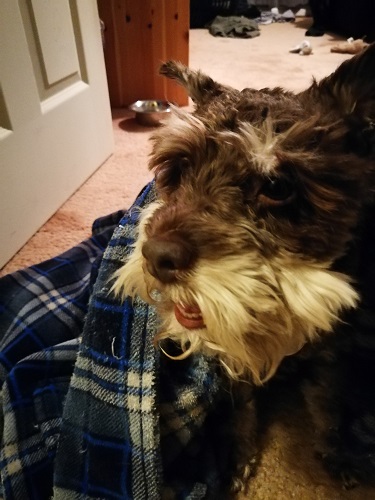 Jake (not the butt from earlier, but @jakodraco himself) sent in these two kitties “The calico is Apple Jack and the ding dong of a tuxedo is Milk Dud.” and as you can see in Jake’s house, the cats pet you. 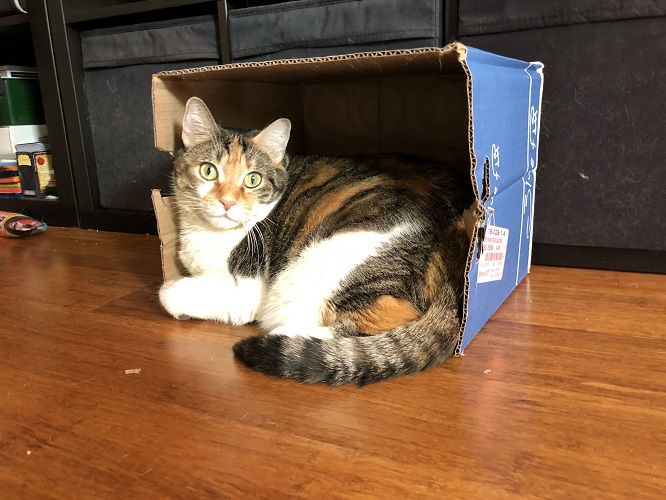 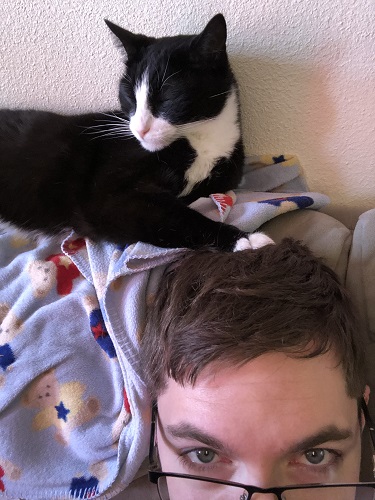 Sticking with the board now, @crithitd20 says “This is Sister, the companion for my older dog. They both have separation anxiety and as such they get along like siblings. Which is to say they bicker all the time but always end up wanting to spend time together.

Like all Huskies she is very chatty and silly, and loves spending time with people, even if she doesn’t understand how to play (she often has a lot of fun just barking at toys instead of using them). Her favorite pastime is staring out of windows, she fancies herself a huntress. Very intimidating she is.” 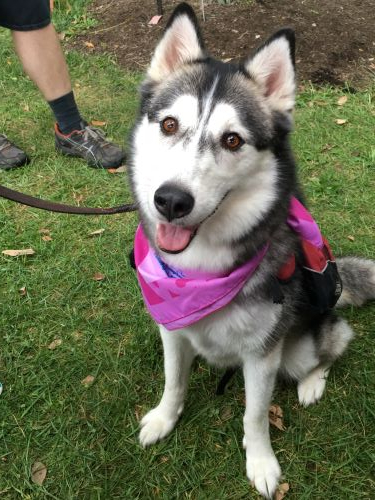 @vesper, always one to go the left-field approach, sent the following “SUMO (Warrior) pig, practicing with a sparring partner” and the least said about this the better ;-) 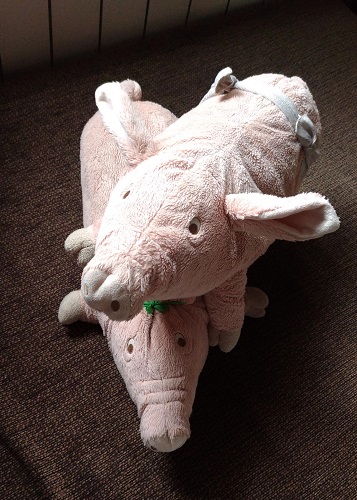 Back to the Board again, we have a submission from El Presidente Zac, who said “Here's a pic of my sweet lad Main Briefcase I. He's a good boy, who only makes the best sounds and never barks or begs.” which is lovely, but I don’t think I’d want him curled up by my legs at night… 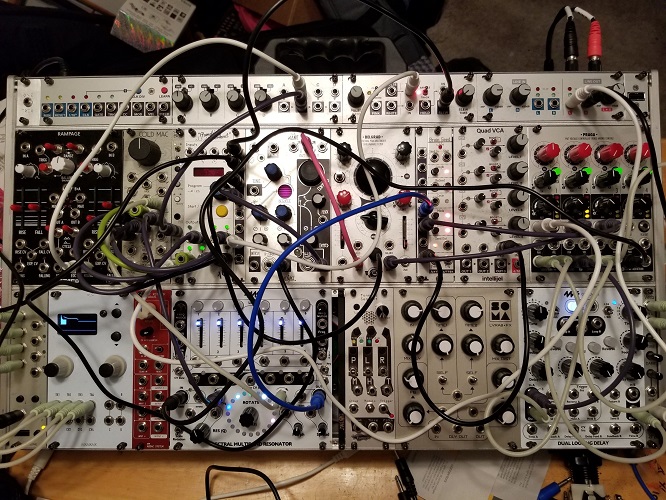 That’s the last strange person who doesn’t know what a pet is, I promise. Someone who does know is @breakonebarrier, who has the very functionally named “Kitty”, saying “she's my sweet angel baby and I'd do anything for her”

Lastly, we have my pair of weirdos. This is Zelda and Midna - a pair of sisters who sadly no longer get to live together because Midna can’t cope with being an indoor cat and so can't live in my flat, and Zelda likes to ruin furniture so Midna lives with my mum and Zelda lives with me. If you can’t work out which is which, I can tell you never played Twilight Princess! 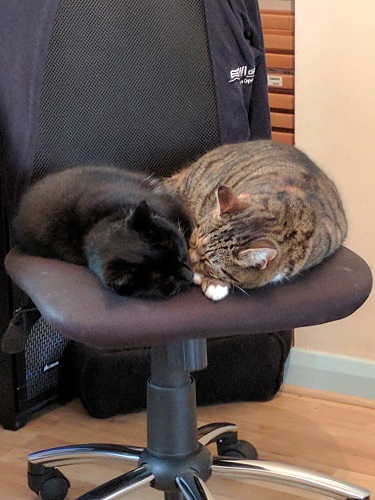 I hope you’ve enjoyed our first April Fool’s Day article, we’ll see you back here soon for some proper info but until then…